IT is a mark of how far we have come in the course of five weeks that a local riding out of the dark into our bush camp on a big red motorbike wanting to take our picture was barely enough for us to bat an eyelid.

To say nothing of a return to bush camping after almost a week of relative luxuries being met with a certain relief and sense of moving on again.

Who needs the nice things in life? We were back on the road and reunited as a group after being scattered around the attractions of our campsites in St Louis and Dakar.*

Back on the road we have been, clocking up the miles across Senegal and, courtesy of some roads which hardly qualify for that description, rather slower through Mali.

And with it came the return of bush camping.

Any qualms any of us may have had about sticking our tents up in the middle of nowhere – basically, anywhere off the road that allows us to set up our temporary home, light a fire and get out again the next morning without anybody noticing or being put out by our presence – have long since vanished and they have become something we are all pretty well drilled in.

Particularly now the weather has picked up after the rains and fluctuating temperatures of Morocco.

Much of the last week can be classified as hot to very hot, sparking a widespread decision to turn to the one-man mosquito tents which spent the first few weeks clogging up our lockers.

And having settled in to our new homes, those of us who can spend the nights looking through the mesh at the stars are only likely to head back into the sturdier two-man tents when the rain returns, especially as they take seconds to put up.

While the tent has largely done its job and kept the mosquitoes out, my reputation as a magnet for annoying buzzy, biting things has proved well deserved and the backs of my legs are covered in scabs and bites.

After a few days of relief, a new batch of itching does not bode well for the next few days.

But let’s rewind to when they really started to make their presence known on our first stop in Senegal at Zebra Bar, near St Louis.

Having settled our bar tabs, we headed off with the words of Steve and Joe ringing in our ears that this would be the last time we would have such a well-equipped campsite for weeks to come (Namibia seems to be the place we have to wait until we come across any further creature comforts).

In the end, we had to wait all of a few hours.

It wasn’t planned, but then neither was finding our intended campsite in Dakar had gone upmarket and couldn’t put us up, eventually pointing us in the direction of another site half an hour or so out of town at Lac Rose.

Initial disappointment at waving farewell to the diners, restaurants and bars which surrounded our intended stop was washed away as we found our new home came complete with showers, wi-fi, a restaurant (well, they did pizzas and omelettes), a bar, a TV showing football and not one, but two pools.

And over the course of the next couple of days we explored pretty much all it had to offer, celebrated Terry’s birthday with a party which ended in and around a pool in the early hours and made it off site to explore the adjacent lake – high in salt, it allows you to float and also appears pink in the right light – and Dakar itself.

It’s not the prettiest city, but like most places, the welcome was pretty much universally friendly and the stocks of bracelets, clothes and, possibly most importantly, beers were all replenished.

But there’s only so much luxury one can take and we headed east from the most westerly point of the entire journey.

And as we headed east towards the Malian border, the roads began to become more of an adventure with Ale’s excellent English vocabulary being supplemented by the word pothole as Steve did his best to avoid the worst of them and the numerous lorries that had fallen victim to the worsening surface.

Home for the night was amid some tall grass off a narrow track and, having had one local sit and watch from a safe distance behind the truck for much of the evening, a group of us settled in with a few beers around the campfire.

And then our new friend arrived on his big red motorbike, laden down by kit and speaking French which we strained to make some sort of sense of, native French speaker Michael seemingly struck dumb by the effects of a near 48-hour Pokemon marathon.

Eventually it became clear – he wanted a picture. Of him, of us, of the truck and all combinations of the above. We sent him on the way with a couple of Oasis stickers, he left us a water melon and an invitation to come for coffee in his village in the morning.

Strangely, can’t see the same happening if a truck full of foreigners set up home in a field back home.

Sadly, we were unable to make it across the nearby railway line to honour the invite, but what could have been a lengthy, uneventful day on the truck was broken up by a series of incidents to keep us entertained among the bumps.

(A couple of intrepid explorers did attempt to find the village the night before, fuelled by a few beers and the sound of distant drums, only to take a slight detour off the track for a comfort stop and not find their way back to camp until after three hours wandering in the bush. They were finally lured home by the sound of snoring.) 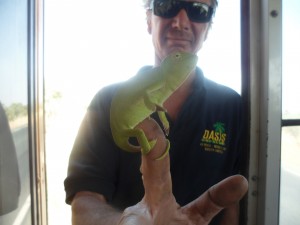 Steve was responsible for two, running back down the road for the first to retrieve a green chameleon from the middle of the road for a few photos on the back of the truck and later heading off behind a tree.

Anxious to see what he would return with this time, we had resigned ourselves to the fact he was just answering a call of nature when he reappeared up the tree in pursuit of the baobob nuts he had seen hanging from it.

But possibly his starring role of the day came in our brief stop in the town of Tambacounda.

For reasons of cost and practicality (with five vegetarians in the party and ice not always available), meat has been in pretty short supply in our evening meals.

So when Steve unearthed a great slab of steak and offered it to anyone willing to stump up 500CFA (about 70p), he nearly got flattened in the rush by the carnivores.

And money well spent it was too.

* Easy to make remarks like that about luxuries when that paragraph was written either side of strolling the few yards to the bar of our base in Malian capital Bamako to add another ice cold Coke to my bar tab. And happy hour is approaching…