OFFICIAL advice from the British Foreign and Commonwealth Office is against all travel to most of Mali and all but “essential travel” to the southern part of the country.

Quite what constitutes “essential travel” is not clearly defined, but when our path round the coast is blocked by the decision to avoid the countries hit hardest by ebola and the north of the country is a no-go area, heading through the capital Bamako is pretty essential for us to continue our journey around Africa.

And after a week in the country, it has proved a fairly essential part of the trip.

It helps that our Bamako base for the last five nights has been stocking up its fridge with beer deliveries and can provide a decent range of meals and cocktails – the latter reserved, largely, for the nightly happy hour.

Spending too much time in the bar has not always been the best idea for those in mosquito tents who had to scale a rickety wooden ladder (made even more precarious by me breaking one of the rungs, leading to a welcome banishment to the main garden) to sleep on a roof overlooking the adjoining German Embassy.

But after such creature comforts and death-defying journeys to bed, we are relaxed, well rested, clean, clutching Nigerian visas in our passports and itching to get back on the road as we turn south again to head to our Christmas rendezvous with a beach.

Mali had already made an impact before we pulled up into the capital as the word road took on a whole new definition.

It was pretty smooth sailing as we headed over the Senegal border fairly easily – fortified by a woman selling very welcome baguettes full of cooked meat outside the police station as we waited for our passports – and into Mali on reasonable roads.

The surface held up to our shopping stop in the main western town of Kayse (where we discovered that while choice may not be wide, it is very affordable, and that Malians seem to enjoy little more than parading in great moped convoys) and beyond to our overnight bush camp.

So being thrown around could not really be blamed for the upset stomach which created a long, dark night under the stars and ensured there was little chance of me joining in as the first dents were made in our well-stocked beer eskie almost straight after breakfast.

The roads continued to be fine until we hit the Senegal River ferry crossing, the wait for which was enlivened by the reaction of crowds of children to their pictures appearing on our cameras.

The road had certainly vanished.

Steve had warned us that his previous journey along this route had been slow and arduous – and he insists it is much better now – so we should have been prepared.

At times, we followed the old railway track, while at others we picked out the only narrow gap available through the trees, ensuring we had to be alert in the back to dodge the protruding branches and leaves – not always with a great deal of success – while crossing a series of dried-up streams and rivers ensured for a bumpy afternoon (when remarkably little beer was spilled).

At least once, the road disappeared completely, forcing a quick about turn and detour through some bush to rejoin the former railway line. 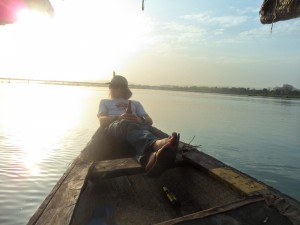 track, but this time with a purpose, a stop allowing us to cool off (and make up for a few days without showers) with a swim in the Senegal River.

A pretty idyllic way to spend the afternoon and we could have stayed there a lot longer, but for the need to press on towards Bamako.

A sore back – not helped by a tumble down a bank as we hopped off the bus for a comfort stop – cook group duties (an ambitious pasta bake which pretty much paid off) and the lingering effects of the upset stomach ensured my first night at The Sleeping Camel on the banks of the Niger River was rather more subdued than those who headed out to a local nightspot.

While those of us who remained set about building a solid base for our bar bills and settling in to our new surroundings, those who ventured out came back with tales to tell of a fairly riotous evening. Well, those who returned before breakfast did.

And so began a relaxed few days as we extended our stop to sort out more visas, a stream of trips to the bar for more cokes, beers, cocktails and food mixed in with film and trivia nights at the hostel, plus a variety of excursions ito check out what downtown Bamako has to offer.

On first sight, not a lot. But it is a bustling, noisy, dusty – typical African – city which rewards those who take the time to look around.

One journey into the markets even produced our own spirit guide who went by the unlikely name of Bob Marley, the rasta from Mali, who may not be too good a judge of how far a couple of hundred metres is, but was certainly true to his word in pointing out a good place to have lunch – although quite what he had during the lunch break we can only guess at, judging by the state of him when we bumped into him again later.

There was nothing wrong with the look of the place the taxis dropped us outside, nor what was on the menu nor the prices. They just didn’t serve alcohol.

So instead of dining at one of Bamako’s top restaurants, we stopped for a beer in a dark shack over the road and ate outside a cafe with a mixture of their own food and bags of meat (goat, we think) picked up from a street vendor down the road.

But our final stop was the highlight of the evening. Titi Marmite’s barely qualified as a bar, more a small store next to a general shop selling cans of beer on what basically constituted a traffic island, complete with a few plastic chairs outside and locals on mopeds zooming on and off the road on either side.

It was basic, cheap, great fun and was once more met with smiles and a friendly welcome from the locals.

Which was more than can be said for the taxi rides home, which headed out of town before we finally convinced them they were going the wrong way and a lengthy debate ensued about exactly where we wanted to go.

Reto’s fairly polished French and my scratchy interventions discovered that our driver not only had no idea where The Sleeping Camel was, but seemingly denied all knowledge of the German Embassy, the nearby Pont des Martyrs and even the Niger River. None of us attempted a translation of “turn left at the footballing hippo”.

Our group trip the next night, to mark Linda’s birthday, was rather more successful in finding our way around – starting with a relaxing, sunset boat trip down the Niger with eskies full of cold beers helping to get things off to a flying start.

A blissful way to spend an early evening, but reminders of just why we are not really meant to be there lurk as jarring pillars of reality – the impressive building courtesy of cash from Gaddafi’s Libya next to the home of a former president sentenced to death three times, standing side by side on the river with the rubbish-strewn banks among which many of the locals live, wash and do their best to exist.

A few more beers followed over a couple of other stops as we were ferried around town in one of the ubiquitous green vans that carry the locals around, invariably with at least one of two people hanging from the open doors.

Our evening came to an end, at various different times, with some live music that bid us a tuneful farewell to an unexpectedly vibrant, essential stop.