CHANGE of plan. Forget journalism, my future lies in running a meat on a stick stand.

Not since Joe bounded on the truck and shouted  “Goats In Trees”* in southern Morocco has one phrase prompted so much excitement as “Meat On A Stick” (not even “free wi-fi”, although the use of the words hot and shower in close proximity can spark a near stampede).

With a distinct lack of care for health and safety, men stand sizzling chunks of meat (often unidentifiable, but usually beef, chicken or goat) on wooden skewers over hot coals which, at a matter of pence each, the meat eaters on board snap up gleefully.

For the vegetarians – and those looking for an accompaniment to straightforward meat – there are chapatis, often filled with eggs, and no shortage of fizzy pop to wash it down.

Three sticks of beef, a chapati and a Coke for US$5. The ultimate fast food for less than a Big Mac.

Surely there’s a market for something like that back in Gloucester (may have to replace the chapatis with Focaccia when expanding to Cheltenham), although not sure they can match the colour, chaos and assault on the senses of the street food markets which peppered our route across Uganda and back towards Kenya after our brief loop out to Rwanda.

There may be less mud on the streets of a British city and doubt you will be accosted by so many people waving lumps of meat at you as soon as you step off the back of the truck. There certainly won’t be any giant maribou storks perched on the roof of the stores and snaffling up any scraps of meat thrown in their general direction.

It’s the perfect lunchtime snack for the hungry office worker – the transformation back into which is looming increasingly large on the horizon as we head out on the final leg of the trip, northwards through Ethiopia, Sudan and Egypt.

There has been a distinct feeling of a watershed in the trip over the past few days after that trek back through Uganda and Kenya before sweeping away from the much-travelled East Africa overland route and back onto the path less travelled.

It has also prompted a return to bush camping – three nights out in the wilds of northern Kenya and southern Ethiopia mixed with long days on the truck watching some superlative countryside roll past promoting a feeling of well-being and scrubbing away any lingering feeling of campsite-induced lethargy.

We have certainly waved farewell to our last bunch of fellow overlanders between now and Cairo.

They were given a crash course in life on the Trans Africa as we rolled into the car park next to them at Jinja, overlooking the River Nile fairly near its source at Lake Victoria.

Faced with a well-stocked bar with a spectacular view (showing almost non-stop rugby for those of us in need of a fix) and the prospect of a Sunset Cruise, most of us did what came naturally – opened up a bar tab, cracked open a couple of cold ones and took our places on the boat.

Details of what followed must remain hazy. Mainly because they are.

What is clear is that it was a very pleasant trip up the river and back, the beers rolled down very nicely, the food followed suit, it is quite difficult to get out of the River Nile after backstroking to shore, red sambucas and blood can be difficult to tell apart, at least three people needed carrying to bed (one of whom later failed to find the strategically-placed bucket, another choosing the wrong tent altogether), carrying people to bed can spell the end of your flip-flops, changing clothes will not help you avoid detection after breaking a toilet if you do it in front of the security guard and a Kiwi and a bloke from Gloucester will watch televised rugby until well after the bar was supposed to have shut.

Not surprisingly, things were a touch quieter the next day, bar a bout of using the slip and slide into the Nile, before large chunks of the group headed out on our final day to do what you would expect at a place called Nile Explorers and went off to explore the river. Often up very close, by means of a raft, canoe or body board.

Some of us just opted to run up that bar tab a little higher and get wet merely by walking out into the afternoon downpour which is so regular in these parts.

Fuelled by an early breakfast from the chapati stand outside the camp (there must be a market somewhere back home for that), we ate up the final few miles of Uganda and, sticking close to the banks of Lake Victoria, pulled up in Kisumu, Kenya.

Celebrations for Reto’s birthday would have been a touch rowdier than they were if the bar had stayed open beyond 9pm and we were not keeping one eye on the shore – just yards from the tents – for any stray hippos emerging from the water.

The wildlife has played a huge role in this trip since we arrived in Namibia on our way down the west of Africa, but while we were short of too much hippo action – a few snorts and splashes rather than too much visual contact – there was one last chance to get out on safari as we rolled into Nakuru (via a quick stop-off to check out one of the huge tea plantations which line the roads through the hills).

Lake Nakuru National Park is famed for its huge flocks of flamingoes, which were distinctly reduced in size as the water level remains pretty high, and both black and white rhinos, the latter of which popped up after a relaxed lunch looking out over the magnificent landscape to complete my personal iSpy list of Africa’s major animals.

It would have been nice to spot a leopard a bit clearer than the amorous ones silhouetted in a tree in the Serengeti, while the rest of the big cats also kept a distinctly low profile, but with no pressure on to spot any creatures with time running out, it was a relaxed farewell to that side of this adventure. 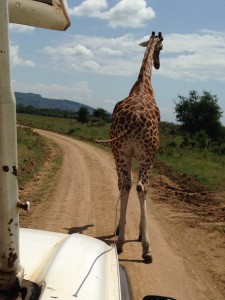 And so, boosted by our final arrival Vance, but shorn of five passengers forced to fly ahead of us to Addis Ababa by the complexities of visas, we rolled out of Nakuru and out onto the final leg.

What lies ahead promises to be very different.

* Spotting goats anywhere unusual still provokes a strange surge of excitement around the truck. Our collection of pictures is such that the Trans Africa Goats On Things calendar will be available sometime after we get home.

One Reply to “Sticking It To The Man”