IN the book Pole to Pole, describing his 1991 journey from the North to South Poles, Michael Palin described the train from Victoria Falls to Bulawayo as keeping the past “assiduously preserved”.

Having made the same overnight journey across Zimbabwe, it appears the train has been “assiduously preserved” by doing absolutely nothing to it across the intervening 24 years. Not sure parts of it have been cleaned in that time.

The National Railway of Zimbabwe – as with much in this fascinating, frustrating country with its somehow joyful, stoic population – has been through tough times since one of my travelling inspirations made the journey.

Plenty has changed since those relatively early days of independence (although the RR logo for Rhodesian Railways, picked out by Palin, still dots the carriages – along, seemingly, with the same paintwork and fittings, albeit in a less favourable state of repair) under the unbroken watch of Robert Mugabe.

The fact our pockets are stuffed full of US dollars says much about what the country has been through. Hyperinflation, mass unemployment and a Government programme of land grabs all but turned the country into an international pariah.

But Mugabe hung on and even well into his 90s, remains the dominant figure (his picture hangs in most public buildings and roads bearing his name sweep through the centre of towns) in a country eager to move on, but seemingly held back by one man’s vision of how things should be, not how it could be,

Yet people remain unmistakably proud of this beautiful country. Their first question is invariably “Are you enjoying Zimbabwe?” or “What do you think of Zimbabwe?” and on any journey you will get to chat to plenty of locals. They are friendly, eager to help, chat, hear about your trip and tell you about their country.

And then you begin to hear tales of the troubles which have beset the country and how, even with things improving since the days of needing large bags of money just to pop down the shops (when there was nothing to buy anyway), many are still struggling to eke out a life in a land rich in natural resources. Just not, it would seem, too many that benefit the vast majority of its inhabitants.

Immaculate is not the way to describe it now. Rather like the rest of the railway system, it has been allowed to decay. The pond has gone, some of the trees remain, but it needs some more fresh paint and the only visible addition since Palin’s arrival is a plaque commemorating a visit by Mugabe himself in 1998 for a visit of South Africa’s famed Blue Train.

There is no faulting the helpfulness when we – Karla and myself, escaping from the confines of the group to Bulawayo a couple of days early – rock up to confirm our booking an hour before the train is due to leave at 7pm.

The guy we have been told to ask for is the only person in the ticket booth, while an older gentleman does some running around on our behalf and the train manager appears to sort out our bookings by vacating in his carriage, allowing us to stay together.

As we sit and wait with our bags and supplies for the night – on the floor, there are no seats and the chances of any food and drink on the train are slim – our helper comes over for a chat (and a tip).

Having worked on the railways for 30 years, he has not been paid for 10 months. Yet he turns up everyday, “just in case” things change.

He sends us off wishing us a good trip through Zimbabwe and ending a whistle-stop visit to Victoria Falls, which we rolled into after an early, relatively quick crossing from Botswana.

While many of the others raced to sign up to throw themselves off bridges and cliff edges on a variety of ropes and harnesses, my choice was a bit more sedate – a walk along the Zimbabwean section of the mighty falls (having confirmed the design for the trip T-shirts).

Not that that was without peril, especially for the relative novice flip-flop wearer as the spray thrown up by what the locals call Mosi-oa-Tunya  (The Smoke That Thunders) turns the path opposite into a shower, complete with slippery surface not that far from a huge drop over the edge and a whole host of rainbows.

And that’s before you remember your passport is still in the pocket of your shorts and needs to be kept dry ahead of being despatched back to London in the quest for Ethiopian visas.

But despite limited vision and the need to stay out of the worst of the spray to avoid a total drenching, the walk is a staggering experience as the water just over the gorge pounds over the drop at a remarkable rate, creating an amazing experience. And noise.

Sorry Niagara, you are no longer my favourite waterfall.

Dried out and stocked up for the train, that was pretty much that for Victoria Falls as we settled into our carriage and rolled away, pretty much on time, towards Bulawayo.

It was a shame not to see more of the town, but for all that our group has meshed together remarkably well over the past six months (we hit that landmark when we were all reunited in Bulawayo), each of us needs some time away to clear our heads, get refreshed and prevent any minor irritations turning into anything more substantial.

Karla still had to put up with the irritation of my snoring whenever the train stopped and retreated to the dining car – completely devoid of food – and bar (selling local brews in plastic bottles to local people) for much of the night.

She could have slept undisturbed for one of our longer stops as a visit to the (limited) facilities ended with a lengthy chat with one of the staff who was clear who should take the blame for the decline of the railway and much of the country – the politicians.

Businessmen are needed, he was clear, but politics keeps them away.

Like several Zimbabweans we have met, he admitted it was not wise to criticise Mugabe (a subject we had been warned to avoid at all cost), but went ahead and did it anyway. Having, of course, asked how we were enjoying his country.

We rolled into “Friendly Bulawayo” – as the welcome sign still declares, as it did on Michael Palin’s arrival – at noon, only three hours late, which is something of a success for this particular train line.

With a Saturday afternoon to fill, a girl from New Zealand and a boy from Gloucester did what comes naturally and found (after much searching and debate among taxi drivers) a brand new bar showing rugby. 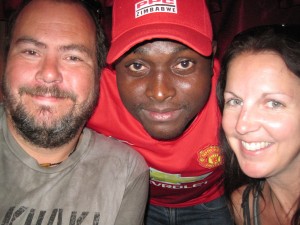 Ensconced early (first ones in) on stools which needed a bungee rope to get off as the evening wore on, we settled into an afternoon of televised sport and chatting to the locals, one of whom remarkably used to live just a few hundred yards from my old school, while another finally drove us home as the last ones out the door.

Sunday morning saw us checking out what Bulawayo has to offer, which seems to largely consist of pie shops. Along with fried chicken joints and pizza places. Very handy for late-night eats, not so good the following morning when everything else is shut.

Actually that’s a bit cruel. It seems a pleasant enough place. A lick of paint here and there would do wonders and, like much of Zimbabwe, it leaves you wondering what it could be with the proper direction.

Refreshed and reinvigorated by a pie and a nap, we headed out again and found ourselves minor celebrities in a bar round the corner from our hotel, photographed by the management for their Facebook page and introduced to the director and several of the clientele.

One was determined to have his picture taken with us, despite not having a camera on him, and equally keen to get hold of the ones we took for him, while another regaled me with his string of grievances at the government which, with a guy claiming to be an officer in the army at the adjacent table, was slightly unnerving and the onset of a, thankfully, brief bout of sickness was a good excuse to head back to bed.

It has been a feature of this week, hearing about the problems of a country which people love but are very cagey about criticising in public, then reading about the British election online with people attacking all sides and the country as a whole.

“Britain is broken” wrote Armando Iannucci in a very good article in the run-up to the vote (a phrase which then seemed to appear countless times in other items with no credit). Zimbabwe is broken and has been for some time, but nobody is writing that or saying it. Because they cannot.

Perhaps those who will be moaning about another Conservative election win – confirmed by an alert on my phone a few minutes ago – might remember that whoever won, most people in Zimbabwe would love to live in a country as “broken” as the UK. And would love to be able to complain about it as openly.

But let’s not, as we rejoined the rest of the group camping at a very pleasant site just outside town and playing with the owners’ young black Labrador, leave this on a negative.

Zimbabwe, at least what we have seen of it so far, is a wonderful country filled with almost universally friendly people, eager to help and even more eager for you to enjoy your time here.

And whatever problems they may still have, you’ll find no complaints from here on that ground.