THIS article has been steadily working its way up the to-do list for a while – one which marks a major personal landmark, one looked forward to with anticipation and one which heralds a huge change in my life.

Rather than looking back on  past travels and sharing tales and tips from trips gone by, this post is announcing my biggest, longest and toughest adventure to date.

Having crossed Europe, North America, chunks of Asia and the Pacific Ocean, it’s time for a new continent – Africa.

And it’s no flying visit. From November until August next year, Africa will be home in by far the most challenging, exciting and, to he honest, nerve-wracking journey of my life.

To be more accurate, home for the 10 months will be a huge yellow truck which will carry me and up to 25 other people around the huge continent from north to south, west to east and all the way back up again.

Those people are strangers at the moment, some will come and go while others will arrive on sections on the trip, but each will play as big a part in what lies ahead as the places we will visit. And what places. 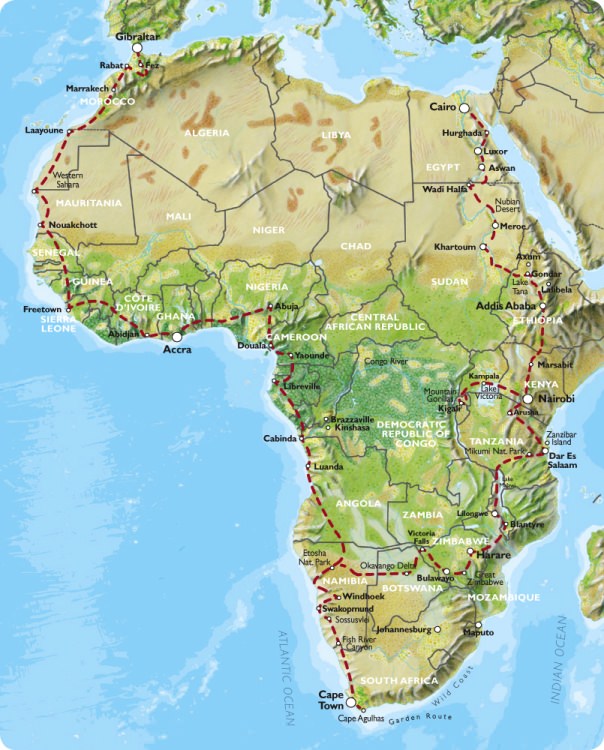 From the moment we come together, with each other and our Oasis Overland truck, in Gibraltar (yes, it’s not Africa but we have to start somewhere), we will head through, deep breath, Morocco, Mauritania, Senegal, Guinea, Sierra Leone, Cote d’Ivoire, Ghana, Togo, Benin, Nigeria, Cameroon, Gabon, Democratic Republic of Congo, Angola, Namibia and the southern point of the route in South Africa.

From there it is back up into Namibia and across through Botswana, Zimbabwe, Mozambique, Malawi and Tanzania to Zanzibar and back up through Rwanda, Uganda, Kenya, Ethiopia, Sudan and, finally, Egypt and journey’s end in Cairo.

At least that’s the plan, with some extraordinary sights, experiences and optional activities along the way – already booked up for a trek so see mountain gorillas in Rwanda – but you need to be flexible on journeys like this, so what exactly lies ahead will be revealed over the course of 38 weeks.

It will be tough at times, there’s no getting away from that. Some long days on the truck in far from ideal conditions, the prospect of having to dig the truck out of sand or mud and 10 months living under canvas.

So being unfit, overweight, with a bad back, having waved farewell to 40 in the rear view mirror a few years ago and having not properly camped in decades, there is a simple question. Why?

There’s endless reasons not to – money, work, mortgage and, to be honest, common sense – but they are all outweighed by the simple fact it seems the right thing to do. And I want to do it.

Travel took over my life four years ago. There’d been a few flirtations with increasingly ambitious trips, but then came the decision to quit my job in journalism and travel overland from London to New York (a tale told elsewhere on this site), followed by a road trip around the eastern USA.

The idea was always to do more travelling than just that, but somehow there was a major detour – bizarrely, into working in travel, which involved a lot of time chatting to and helping people looking for that great adventure, which only served to add to the sense of wanderlust.

Now, after working in travel in one form or another for the last three and a bit years, including forming a small overland travel firm (currently on hold, but more of that in later entries) alongside a return to journalism, the time seems right to hit the road again.

There’s plenty of reasons not to, to put it all off for another day. But who knows what is just around the corner?

My father did his National Service as a medic in Singapore and Malaysia. He always said he would return there with my mum when they both retired. But they never got the chance before outside influences intervened and, having lost both of them far too early, that has stuck with me.

Having bumped into the guys from Oasis Overland at a trade show, a quick visit to their website was followed by a rather longer one and a couple of very long ones as the thought of climbing on board one of their trademark big yellow trucks took hold and quickly dispelled all counter arguments.

So, the decision is made, notice has been handed in at work (albeit the leaving date is not for another seven months), the first of my obligatory to-do lists has been drawn and redrawn and the first bit of kit has been bought.

The main task over the next seven months, bar working my way through that to-do list and stopping the kit pile getting too big with my inability not to follow my own advice to pack lightly, is to lose weight and get fit.

Follow the progress of preparations, getting fit, more details of the trip and, of course, every step of the way around Africa here.