THE opening days in Namibia have reacquainted us to some of life’s little essentials.

Showers, draught beers, meat, pavements, people having the right change, orders arriving in less than an hour, rugby on TV, even beds.

It has given us our biggest taste yet of some of Africa’s wildlife – lions, rhinos, elephants, wildebeests, giraffes by the bucketful, hyenas, zebra and any number of varieties of antelope (not just served up on a plate).

And we have spotted large herds of a creature in its natural habitat which has largely eluded us in the first half of the journey – the overlander.

Initially, they can be spotted milling around their own territory (trucks of various hues and designs) and sticking close to their own herd, with which they have travelled for a varying degree of time (the long-distance overlanders, like us, who spend many months migrating around the continent and the more common short-termers, who are abundant in southern and eastern Africa).

Gradually, however, the different herds will congregate at a watering hole and the allure of fresh meat sees the predators in each group closing in on their next victim. Sorry, target. 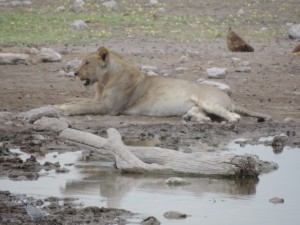 Refreshed by a few of the local offerings, members of each group will eye each other across the hunting ground, move in for the ritual mating dance and eventually move away from their respective groups and find somewhere a little more private.

Or not, depending on their group’s sleeping arrangements, which can create a long night for other members of the herd. 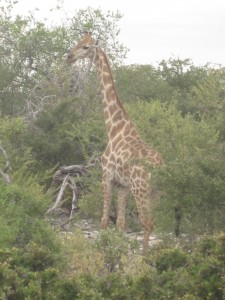 The overlanders rolled into town in large numbers as we arrived in Swakopmund with up to four trucks parked in the courtyard of our base for three nights, with others dotted around town and descending on the same watering holes.

Differing herds can usually be told apart by their dress, length of hair (or beards) and sheer excitement at having a bed for the night and a shower – the longer they have been on the road, the longer the hair, more thrown together the clothing (from whatever it is clean) and more excited at the odd luxury (which doesn’t even have to be that luxurious) after so long in bush camps.

Not that we have been starved of delights and luxuries on our way down into Namibia with some spectacular settings for our camps and the attractions of Etosha National Park, which served up a series of real treats (not least the showers, for those who were in quick enough to get hot ones).

By the time we reached the showers – via a quick trip to the campsite pool for some of us – we had already been treated to a special couple of hours after clocking in for our 24-hour pass having stayed not far from the park’s boundaries.

A reserve centred around a huge, dry pan, Etosha is renowned as one of the best places to spot wildlife in Southern Africa, but we had been warned it may not be the richest of pickings with the rains dispersing the animals across the park rather than concentrating them around the watering holes.

To add to that, kneeling on the seats to watch out for the wildlife was not the prescribed treatment for my infected leg – which is supposed to be raised at every opportunity, leading to some interesting improvised footrests over the last few nights – but what happened over the next couple of hours made any discomfort more than worthwhile.

We had not even made it from the front gate to book in before the wildlife started appearing. 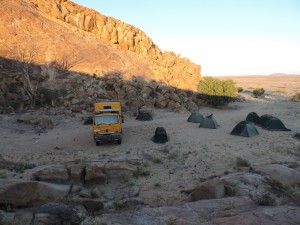 A kudu started things off (surprisingly large and, later investigation would reveal, very tasty), followed by a group of giraffe grazing amid the trees by the side of the road and then a lone hyena, loitering long enough on the verge for the cameras to snap and defying warnings we would be very lucky to see them. 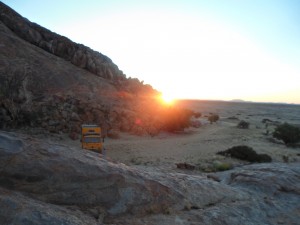 And that was just the start. Our first watering hole was flanked, on one side at least, by zebra and various antelope and impala with one lone giraffe making his way down the middle of the road, but then we cast a glance at the other side of the water.

Lying there, not taking the slightest bit of notice of us, were three lionesses with a male stretched out in the long grass a hundred yards or so behind.

Just a few minutes in and we had hit one of the big five, to be followed in quick succession by jackals, ostriches, wildebeest, loads of giraffe, zebra and antelope, even a tortoise. it was almost a relief to have a slightly more barren afternoon, wildlife wise, as we made our way through the park to our base at Hilali Camp.

Showers, swim and food out of the way, it was time for more animal spotting as we headed up the path to the seating area overlooking the camp’s floodlit watering hole.

It was not the busiest of nights down by the water and rain cut short some plans to spend the night there, but a couple of hours spent watching rhinos and an elephant popping down for a drink is a not a bad way to end the day.

An early start the next day had us at the camp gates pretty much as they opened at sunrise and heading towards the park exit before our 24 hours ran out, which was a bit of a push as we were joined by a hyena walking down the road and, finally, a lion trotting alongside the truck as he made his way through the bush.

It could all have been a bit of an anti-climax after that, but after a lunch stop in the town of Outjo, we headed up towards the Brandberg Mountains and a bush camp in a stunning setting among the rocks in the desert which provided a spectacular view of the sunset and, for those of us who climbed out of bed to scale the rocks, sunrise.

With time to spare before we arrived in the relative civilisation of Swakopmund, we headed out into the desert via a beautiful, if largely untended, road which we did our best to smooth out as much as possible along the way.

After lunching in the heat of the desert plateau, we plunged down towards the coast and through the Benguela Current, which blows up from the Antarctic and saw us donning long trousers over the next few days, in many cases for the first time since Morocco.

A quick paddle in the suddenly very cold Atlantic, fish and chips in Henties Bay and a bush camp in a dried-up river bed – which only saw us get stuck in the sand five or six times and had us trailing behind the truck carrying the sand mats – illuminated by a huge bonfire and we were on the road for the final few miles into Swakopmund.

As the first major settlement we hit in southern Africa – to say nothing of its reputation as a backpacker mecca and activity centre – Swakopmund has taken on near mythical status over the past few weeks.

It is, for all that, a strange place. Still showing a distinct German heritage (even though they have not run the place for a century and were only really there for about 30 years), it comes across like an old English seaside resort. If it was surrounded by sand dunes, run by Africans and organised by Germans.

And over the course of three days, we did our best to savour as many of its delights as possible – especially the liquid ones and anything which might once have been spotted on a game drive but was just as cherished on a plate, to say nothing of televised rugby which surprisingly found the people from Gloucester and New Zealand turning down a meal out to catch the end of Bulls v Crusaders. One of them rather more loudly than the other.

As well as nocturnal adventures as the different overland herds became increasingly entwined, we headed out on a variety of adventures in the desert – sandboarding, quad biking or sky diving.

My personal choice was quad biking, saving careering down dunes on a board until we return on the way back north – when, hopefully, my leg will have cleared up enough to make walking back up a more palatable proposition.

And by then, there should be a new crop of overlanders gathering around the watering holes for the predators…