MOST of my journeys in recent years have started by turning right.

Not just boarding flights, when even my one incursion into life behind the posh curtain came via a lucky escape from what was shaping up to be a long, frustrating night crossing the Atlantic in cattle class.

Any pretence at appearing to belong in the posh seats was rather ruined by attempting to get off the plane by turning right and heading towards the cockpit, rather than left and back towards the exit. 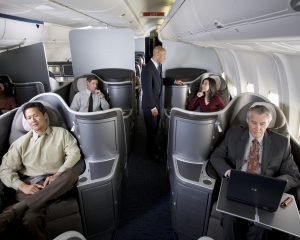 Let’s blame it on being disoriented after sleeping through a flight (well, almost, was paranoid of keeping the first class cabin awake by snoring).

Even jumping on the back of a big yellow truck on the way round Africa, my standard position was off to the right at the back – extra room staked against the increased chance of getting sent airborne if the truck hit any serious bumps or potholes.*

And for the last couple of years, my everyday commute has started by turning right out the front door and making my way to the office through a combination of walking and bus. An hour at least.

A recent post outlined the big change in my working life with the switch from daily to weekly newspapers and posed the question of what to do with my weekends cleared from work (not entirely, managed to find stuff that is best got out of the way then, but can be slotted in around everything else).

Now there is more time back – that commute is down to, at rough estimate, all of two minutes.

All from turning left and wandering the couple of hundred yards to our new office.

The postman can’t find it, the milkman delivers to the office over the corridor and nobody can agree on whether it is too hot or too cold in the office, but from considering home early if The One Show was still on, a late return now is if Pointless has finished.

One impact of this is the knock-on effect on the A-Z trip through my iPod – the cornerstone journey of this blog.

Instead of that hour of travelling every morning (got a lift home most nights) to rattle through the tracks, a journey to work now would cover only the shortest entries on the A-Z.

So whatever the answer is to do with the new-found spare time – more regular posts would be one idea, once that time has stopped being filled with an awful lot of… well, nothing constructive really – it needs to involve more listening to the iPod.

And with everything else going on, the simple answer is finally (seriously, it’s been far, far too long) to get back to the gym.

The gym sits across the square from my flat, the lights shining out through the large windows around the clock – the other side of the ice rink and the Ferris wheel at the moment – every night reminding me just how long it has been.

There is an excuse. For some time, that would have involved a gag about my back/shoulder/knee (delete as applicable).

But it seriously has been stopped in recent months by a hip. A hip which could yet spark more telling changes to my life than those at work.

Diagnosed by my osteopath as bursitis – technically, inflammation of a fluid-filled sac which acts as a cushion between tendons and bones; in practice, bloody painful area which, in my case, moved down through my thigh and into the knee with any form of exertion, even that short walk to work would have been a strain at its worst – he pointed me in the way of my GP for a further check.

Being a bloke, going to the doctor is usually put off as long as possible, but this instruction seemed worth following.

As was the final verdict that there was little wrong that could not be solved by the one thing both of us knew long before the subject was broached – it was time to lose some weight.

And for once, it was not put on the to-do list and ignored.

If it was not for that hip – not perfect but much better and at a point where that initial return to the gym is on the agenda in the next few days out of the office – it would not be walking me to a Slimming World class once a week.

And it seems to be working, 11 and a half pounds lost in the opening two weeks. Not quite so confident ahead of this week’s weigh-in, particularly after rather exceeding the allowed amount of beer (and cheese) at the office Christmas do, and there’s a long way to go but already feeling much better on it.

Add the creaking joints to too much weight and pre-diet me rarely felt comfortable. There was always some pressure pushing somewhere.

But even this early in the diet – and need to expand my recipe horizons and start cooking properly after keeping it really simple so far – it feels like someone has opened the bottle on a large bottle of Coke (a habit kicked cold turkey) and released some of that pressure.

Time to return to the gym while the initial eagerness is there to tackle three birds with one stone – lose weight, fill those extra hours with something meaningful and listen to the iPod at the same time.

When the return to the iPod journey does pick up again, it will be in the relatively early stages of G – the stuttering recent weeks taking us from Public Service Broadcasting (apt after the last entry) to De La Soul.

Along the way we saw plenty of old favourites – Echo and the Bunnymen (The Game), The Clash (Garageland), REM (Get Up, twice) and The Wedding Present who chipped in with a pair of cover version which both came in their original form – Getting Nowhere Fast by Girls At Our Best and Getting Better by The Beatles, who also contributed four versions of Get Back.

There were also multiple versions of Get Off by The Dandy Warhols, plus multiple songs from Gomez – Get Miles and Get Myself Arrested back to back – and we even got unusually Radio 1 friendly with Daft Punk’s Get Lucky.

Not sure exactly what Radio 1 would make of Georgia, Georgia or anything by Elliott Smith for that matter. But that’s the type of forgotten pleasure or discovery which is the whole driving force behind this blog.

Same goes for Belly’s Gepetto. And Get Free by The Vines. Both long overlooked but which had me singing in the office for much of the day.

More good reasons (beyond getting fit and losing weight) to get back on the gym and plugged in to the iPod.

*Oasis Overland recommend all passengers wear their seatbelts at all time. Another rule we largely ignored.