ON the first night of 2015, sat in a dark bar on the Ghanaian coast, wrote a reflective piece on the state of life on a big yellow truck less than a quarter of the way through a journey around Africa.

Twelve months on, on the first night of 2016, sat down to do the same thing at the resumption of what was about to become my new idea of normality…

Well, that was the intention. One look at the date which sits at the top of this post reveals the good intentions of New Year’s Day were not fulfilled. Certainly got as far as picking up the laptop, stared at the screen for a while and, probably, got distracted by reading old posts, some YouTube videos or Facebook posts.

For many of the evenings, and a few afternoons, since, the plan was to finally get round to writing this post, only for something to distract me or a sheer lack of inspiration or energy to take over.

And so, just over a year on from that post in the dim light of the bar at The Stumble Inn, Elmina, what is the state of my life?

A lot has changed. It is a lot colder for starters. And tonight, for the first time since well before that night, my own bed awaits me. Not a temporary one in a hostel or upgrade, not a faltering airbed in a tent somewhere in Africa, not on my sister’s sofa fighting for supremacy with a black Labrador and not, as has been the case for the last few weeks, on a mattress on the floor.

The bed has been in boxes waiting to be assembled in my new flat (another change we’ll get to in a bit) for slightly longer than this post has been waiting to be written and the brother-in-law kindly spared me some time to piece it all together (Gloucester and Hereford obviously both away).

Not that there’ll be a nice long Sunday lie-in in it. Instead it is up and off to work (on the bus until the old faithful wheels are replaced by a new model) and a day designing sports pages in what, for the first time in a few years, is back to being a career, rather than merely a job up to the next bout of travelling.

Travelling is far from off the agenda. If anything, the mental bucket list of places to visit and things to do is even longer than before heading to Africa. But the plan is short and often, rather than any more lengthy epics. At least for a few years. 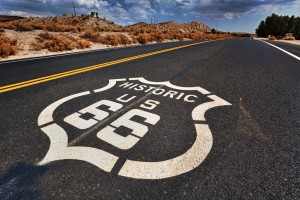 Next up is a summer break to familiar ground in the US. And both Route 66 and Australia/New Zealand are high on the list for the next couple of years, but will be looking to squeeze them into my holiday allocation. Think the days of quitting jobs to travel are behind me. Probably.

And so what of the job?

Somehow, managed to quit my job, go travelling, beg for a few freelance shifts and end up back at my old desk with an improved role. Well, sort of, still waiting for IT to sort out my old desk.

It wasn’t quite that straightforward. There was a spell as a freelance (supposedly three days a week but actually five or six), then taken on as staff, only in a different position and even a different place – shipped off to Bath to plug a gap on the paper down there for two months, before finally heading home to that new, improved role at the start of the year.

It comes complete with a lengthy to-do list which has barely been started in the opening weeks as the whole department gets used to a new structure and responsibilities and somehow managed to volunteer myself to draw up a new style guide, which partly explains the silence on this blog.

In amid all that (with Christmas thrown in just to confuse things a bit further), there’s been a move into a new flat to work my way through.

The resolution to get back to the gym should be made a bit easier as you can actually see it from the front window of my flat. The fact you can also see three pubs and as many restaurants may not help that plan (to mention nothing of the ones you can’t see just around the corner and the two cafes downstairs).

Which just leaves this blog. What’s happening there?

If the past few weeks of silence has not already tipped you off, it is taking a bit of a break. Not just because it has been pretty hard to fit it all in (or find the energy and inspiration to do it properly), but because it is going to undergo a few changes.

A bit of a new look, a bit more structure, a lot more from Africa, a fair amount more from the lengthy list of travel pieces which has been sat gathering dust for ages and lots, lots more from the A-Z iPod challenge.

There may well be a couple of posts during the hiatus, which should not be that long (depends on how confusing all the technical changes are), and at least the break will give me a chance to catch up on the backlog of new music which has been downloaded since my return home.

The old faithfuls came up strong in the latest batch of A-Z songs took us from two versions of Echo and the Bunnymen’s classic Do It Clean to the less than classic Don’t Run Our Hearts Around by Black Mountain (via number 2,500 – Don’t Ask About My Husband by Mark Kozelek & DesertShore – which is already 49 further down the line, given the post-Christmas influx of new tracks).

Kozelek also popped up in his Sun Kil Moon guise with Dogs, the wonderful trawl through his romantic/sexual history, while a belated rediscovery of Super Furry Animals brought us Do Or Die.

Old favourites shone again with two from Ryan Adams (Do Miss America and the lovely Don’t Ask For The Water), Billy Bragg (Dolphins) and REM’s (Don’t Go Back To) Rockville.

Don’t Let Me Down, Gently took me back to the brief time when The Wonder Stuff occupied my turntable, plus notable entries from The Flaming Lips (Do You Realize?), Public Enemy (Don’t Believe The Hype) and The Libertines with Don’t Look Back Into The Sun, one of just two of their tracks that are really worth revisiting.

Promise to get the blog fully functioning again before they break up again.