WHEN the time comes to sit back and reflect on this Trans Africa adventure, the few days we spent either side of the Uganda-Rwanda border are likely to take prominence.

Any feeling of lethargy which may have crept in was washed away as the upper reaches of the list of my favourite moments on the trip were completely rewritten.

Over the course of four days, we laughed, danced (well, sort of), sang, climbed, descended, slipped, fell, sank into mud, got soaked and went through a range of emotions from delight to horror, mixing the life-affirming and downright hilarious with the chilling, awe-inspiring and difficult to process.

To say nothing of trekking up some serious slopes to share these memorable experiences with the inhabitants of the upper reaches.

Yep, no room for lethargy. 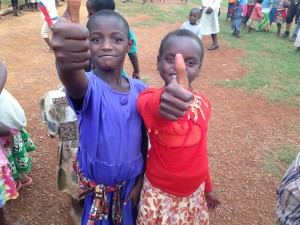 The trek up into the mountains to spend an hour with gorillas, had long been tagged as a highlight – even if the prospect of walking up the slope with my current state of fitness (or lack of it) had a few alarm bells ringing – since booking it at the same time as the whole trip.

And, for very different reasons, the trip to the Genocide Memorial in the Rwandan capital Kigali was also chalked up on the must-do list before leaving home. 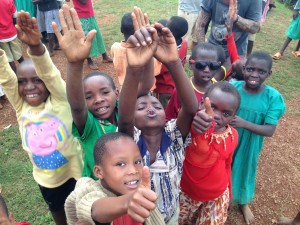 Neither disappointed, but we’ll get there in later posts – when you can discover just how my feet were taken out from under me by a passing gorilla.

But the events of Lake Bunyonyi came as a pleasant surprise for all of us who shared an enchanting, exhausting, inspiring and thought-provoking few hours among the children and community of the hillside overlooking the picturesque lake and the rather more luxurious lodges and resorts on the opposite bank. 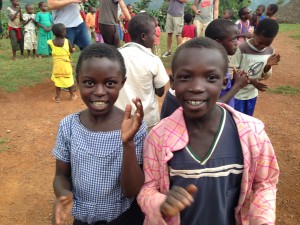 Our destination, via a boat ride across the lake and a short, steep trek up the hill – thankfully just under half of the hour Joe had predicted it would take and, more remarkably, with me right up the front of the line all the way, albeit blowing hard by the end – was the school which has been created for the local children.

Many of those children, who were torn between paying attention to their lessons and watching us as we breathlessly arrived outside their classrooms, have lost one or both parents to HIV (a sign as we passed through Kampala spelled out the stark statistic that 375 people contract the virus each day in Uganda). 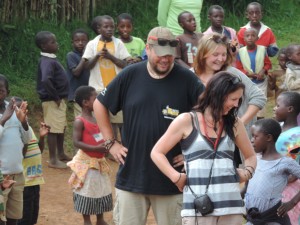 The community, spearheaded by our host and guide Edison, has rallied together to build the school, support the orphaned youngsters and work on creating a destination for volunteers – hopefully some time in the near future – to live and work at the heart of village life.

As long as volunteers do not expect too many luxuries (well, any to be honest) and are pretty good at walking up and down the hill to collect anything they may need, as the villagers and children do constantly. 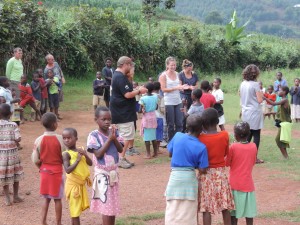 Joe has been bringing his Oasis groups here over the last couple of years and had arranged for us to break new ground, becoming the first party to spend the night at the school – much to the excitement of Edison, who gave us a quick tour (it’s not a big place, so it was always going to be quick) and explanation of the project as the children finished their lessons.

Once they had cleared the classrooms, we moved in, setting up our beds for the night on the mud floors under the mosquito nets we had brought with us to leave behind so future groups can follow suit. 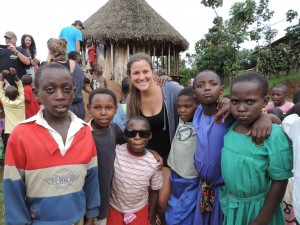 We emerged back into the light to the sound of singing from the adjoining grassy area and gradually assembled outside the ring of children as they went through their repertoire of songs – each with its own dance moves, which they had pretty much down to perfection, and accompanied by a single drum which kept time throughout, whoever happened to be playing it.

Gradually, we joined (or were coerced into) the circle to join in the singing and dancing (well, clapping at the very least) and over the course of the next three hours, we fed off the infectious energy of the children through a series of seemingly more complicated and energetic dance routines and games, which at least gave us the chance to sit down and rest in between. 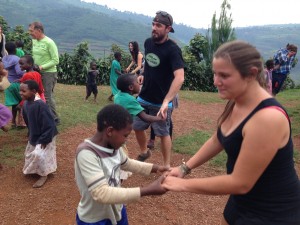 At least until your team won one of the series of games, which instantly sparked a bout of jumping up and down, singing “We are the winners” in celebration. Any reluctance to join in was met by a group of small children attempting to pull you to your feet (they may have struggled with me) and share in their joy.

All a very different approach to us, who mocked whichever one of us lost a game rather than celebrating who won. Thankfully, they did not take our lead – except when they waited for us to laugh first (as we did, hysterically) when Ale’s turn at the blindfold running race ended with her heading sideways into a chair.

Each of us developed our own little team of children, who steered us through the dance routines, held our hands, donned our sunglasses (which became pretty difficult to keep track of), played with our armfuls of bracelets (and nearly choked me by pulling at my necklace) and crowded round to check out the pictures they fought to get in. 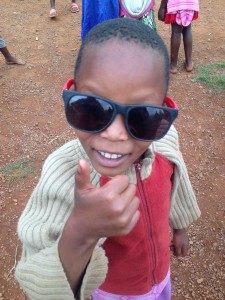 A couple even became obsessed with watches – one young girl attempting to push the second hand round on mine – while one of the smallest, William, whiled away the afternoon undoing my shoelaces until the prospect of a hug from Karla proved more enticing as he came to the verge of tears after losing his blindfold race (still, unlike Reto, he did not claim a win over a small child who had actually finished first).

It was all utterly joyous and one of those experiences with the African people which will live in the memory, but it was also dotted with reminders of exactly why we were there – and why so many of these children need the help of places like this. 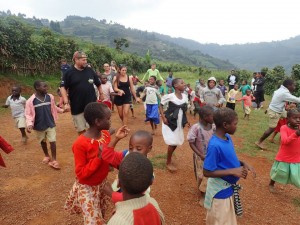 Taking a breather from the non-stop action, one of the teachers steered the children through a series of poems they had been learning.

Starting with the charming, if vital, message of Milk (which proclaimed a crucial friendship with cows), the poems soon took on a darker edge, particularly one about AIDS.

“AIDS, you took away our parents, AIDS, you made us orphans…” 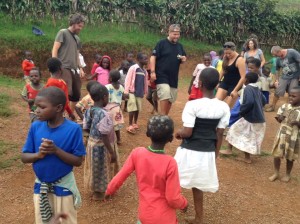 It was truly heartbreaking and as the children continued through their poetic repertoire – moving on to one about praying for a friend who was at the hospital with his sick mother – a quick look around the group showed a few faces struggling to process what they were hearing (as confirmed by our chat around the campfire on the same spot as darkness fell).

Whether it is 20-odd years as a journalist or my natural disposition, a certain (hopefully healthy in most cases) cynicism tends to run through my veins. When faced with televised 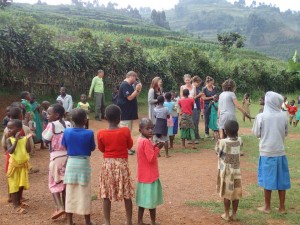 charitable extravaganzas, the sight of a celebrity emoting to camera about the plight of starving children usually has me reaching for the remote control rather than the telephone to donate.

But if this trip has done anything, it has diluted that cynicism – how can it not when people who have so little are so willing to share whatever they have got, even if it is only time or a place to sleep?

Edison exemplified that – once the children had gone home, still full of energy while we were all flagging – with a sublime meal of chicken, crayfish, rice, potatoes and vegetables cooked at his house and then heading down the hill to fetch us beers to drink around the fire before we headed to bed exhausted but happy.

He was at it again in the morning, sending us on our way with tea and chapatis to fuel a final climb to the top of the hill, along the ridge for some spectacular views of the lake and the 29 islands which dot it and back down to catch the boat back across the lake and back to Nala for the short trip to Rwanda.

And that’s a whole other story…