THINK it is only right to start this entry with a confession.

My first gig was not, as has been the answer to that question for more than a quarter of a century, Echo and The Bunnymen at Gloucester Leisure Centre in 1985.

No, for some reason lost in the mists of time – it might have had something to do with my sister getting tickets – it was Culture Club at the same venue a couple of years earlier. Not overly embarrassing (given my sister’s record collection, it could have been an awful lot worse), but one which has left no lasting memory except for the fact it actually happened.

For anyone growing up in Gloucester in the 1980s and without easy access to transport to Bristol, Cardiff or further afield, gigs from any act we might have heard on the radio or seen on Top of the Pops or, preferably, The Tube were rare events.

Before the advent of the Guildhall Arts Centre – previously the Mayor’s Parlour and venue to Christmas parties for generations of Gloucester children – and its Friday night Banana Club, which finally provided a home for the indie kids, just as we were laying down our raincoats and grooving while simultaneously staring at our shoes through floppy fringes, there was only really Gloucester Leisure Centre.

More often used for five-a-side football, badminton and school holiday sporting activities, acoustics in the cavernous sports hall were atrocious (the Pixies got round that by being unbelievably loud, not long before it was closed down for being unstable and rebuilt). Not that we knew that, given there was usually just one big gig a year.

So, having distanced the Culture Club experience from my mind, my first chance to see one of my bands was the Bunnymen (supported by The Woodentops). 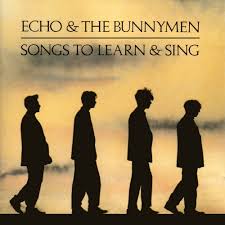 Their singles collection Songs to Learn and Sing had just been released and the process of devouring that and rediscovering their earlier stuff we had missed in our early teens had just begun.

And at least one 15-year-old fan was hooked (actor Simon Pegg, from just down the road in Brockworth and the same age as me, listed it as his first gig, describing it as ‘extraordinary’ in the NME).

Details are hazy, but a fight broke out next to me at one point, there was a huge silhouette – spiky hair et al – of McCulloch projected on the back wall and a wonderful version of Over The Wall. But it was definitely brilliant.

The Bunnymen soundtracked the rest of my teenage years, providing a musical identity, sending me towards discovering their musical contemporaries, a penchant for long, black overcoats* and some shortlived, ill-advised attempts at aping Ian McCulloch’s haircut (too long and too much like hard work).

Many of their tracks still appear on my list of all-time favourites and, if anyone cares to listen, there is a well-honed argument that the second side of Ocean Rain (LPs, those rather larger precursors to CDs used to have two sides, kids) is about as perfect a 20-odd minute stretch of music as put down on vinyl (look it up, kids).

And they were the dominant force in this latest section of my iPod, which started out with four airings for the wonderful All My Colours – two original, two live of which one is McCulloch without his sadly depleted band mates. There is a fifth, live version, to come under its alternative title Zimbo with African drummers joining the much-missed Pete deFreitas, but that’s some way off in the final stages of this long-distance journey.

There were also two versions of early offering All That Jazz and one of All My Life from their Crystal Days four CD box set (told you, big fan).

The only other multiple entry in this section was, slightly surprisingly, All The Small Things by Blink 182.

Yes, it is slightly cheesy, a bit naff and springs from that period in music when wannabe punks seemed to believe that simply playing guitars alone was enough to make them rebels.

Still, it’s a pretty good pop song and for a while was in the running to be “our tune” in a relationship where our musical likes very rarely overlapped. Think Killing In The Name Of by Rage Against The Machine won out for that title. Just before we split up.

The major landmark of this section was number 200 – the honour falling to All These Things That I’ve Done by The Killers, when All The Young Dudes (199) by Mott the Hoople and here courtesy of the Juno soundtrack would have been much preferable – while it ended on All Time by January. No, me neither, but it evidently appeared on an Uncut compilation years ago, is reminiscent of Catherine Wheel and comes complete with the sound of a band gazing at their shoes.

And, if you were wondering, there is no Culture Club to come.

* One of the overcoats proved magical in many ways. Purloined off my grandfather it was, somehow, down below my knees despite him being several inches shorter, so where it came to on him is anyone’s guess. It also came with very deep pockets, which helped smuggle more than one partially drunk pint out of the pub come the end of the night.

Sadly, it was lost at one of a string of teenage parties at Gloucester Old Boys rugby club and has never been adequately replaced.