Travel Marmot started as a site to house blog posts from travelling and assorted writing in one place – an idea floated over a couple of pints which became a reality by morning because one of the people in the conversation knew how to create that stuff and took the idea literally.

It contains the writing of journalist Rob Freeman on travel, overlanding and, to fill the gap when both of those were in short supply, music and the frustrations and passions of modern life.

Unless there has been another redesign, that furry little fella in the top right is Norman the Marmot. While his friends ran for cover, Norman sat and posed for the camera on the edge of Jenny Lake in the Grand Tetons, Wyoming, and became something of a hero. One throwaway line in the pub later and he had a website named after him.

Who is the Travel Marmot?

Born and bred in Gloucester – hence an obsession, fairly standard in these parts 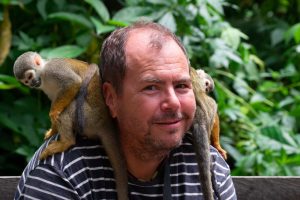 , with the city’s rugby club – have spent much of the last 30 years working as journalist.

Having covered such earth-shattering stories as the canal that sprung a leak, the perils of relieving yourself through a dodgy sash window and my attempted banning from a parish council meeting over a duck pond row, most of my career has been spent writing and producing sport pages.

Covered various global competitions from Rugby World Cups to the World Shove Ha’Penny Championships before getting tied to a desk and the permanent move to the more grown-up world of news and fighting to keep print flourishing in a digital world.

Currently to be found working from home writing about business in a world which has got a lot smaller – waiting for travel to start up again.

Think the travel bug – and the desire to write about it – first took hold when a few features editors were convinced to send me on overseas press trips, usually skiing to some odd parts of Europe. Six weeks in the US added to the itchy feet and that was followed by my introduction to overlanding with three months travelling from London to New York and another US road trip.

Having worked for a small overlanding company for a year, returned to journalism – while attempting to get a two-man travel sideline off the ground – before heading out on my longest travels to date, 10 months on the Oasis Trans Africa adventure.

And having pledged not to tackle another long overland trip, set out on a circuit of South America which was five weeks from the end before coronavirus forced us home.

Thanks to everybody who has helped with this website, particularly travel companions, anyone met along the way and Jason Hankin for taking a pub conversation seriously and sparking it all into life.