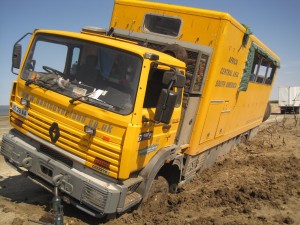 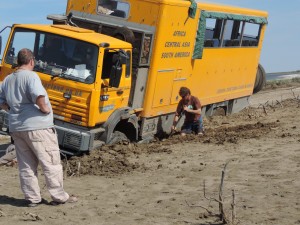 HOW nutritious is sand?

Just throwing that out there in a vain attempt to work out exactly what has made up a large chunk of my diet over the past few days.

Since arriving in the Mauritanian capital of Nouakchott, there has been the added bonus of some very welcome meat – courtesy of Ali Baba’s burgers and shawarma across the street from our base – but eggs, bread, vegetables and sand have been the mainstays of my very unbalanced diet.

With as many cokes as can be squeezed into the esky and a lot of water thrown in.

But everything – food, tents, clothes, truck floor – comes complete with a thin layer of sand.

Since emerging from the mud and floods of Morocco, the temperature has been going up and the scorched earth drying out – little wonder as we have been crossing the disputed Western Sahara (which was far from a desert when we first entered) and Mauritania with its average December rainfall of precisely zero.

Mauritania is also a strict Islamic republic so is completely dry in another sense, leading to some frantic downing of the remaining alcohol stocks before we reached the border and big plans for a rapid trip to the bar as soon as we cross into Senegal.

Probably most importantly, Mauritania is also on the Foreign and Commonwealth Office’s list of places where the advice is only for essential travel (further east, that advice switches to no travel at all, ruling out large swathes of what looks a fascinating history), while the Western Sahara’s ownership is not recognised by most countries, although Morocco is pretty clear it belongs to her.

It all adds up to two things – lots of police checkpoints (sometimes just a few hundred metres apart) and fairly rapid progress through both countries over the past few days with long hours on the back of the truck.

There are a variety of methods to ride out the time as truck days have fallen into a fairly similar pattern.

The day starts – often to the strains of the call to prayer from the nearest minaret – early, normally 6.15am for the fire group, who chop the necessary wood (not so easy now we are in a desert), get the morning blaze alight (much easier now everything is not so wet) and ensure the kettles are filled and boiling for the tea and coffee addicts.

Next up are the cook group, usually 15 minutes later, to start setting up the kitchen and sorting out what they are serving up.

Some groups have been reasonably ambitious – Linda’s Spanish omelette – while a fried egg sarnie and the occasional eggy bread have been greeted with delight, but the standard options have been toast or cereal, especially with fewer shopping options in the last week.

Breakfast starts an hour before departure time and sees the masses gradually emerge from their tents, wolf down whatever is on offer and race through the morning routine – shower (if available), use whatever facilities are available (or not), pack up their kit and put away their tents and the kitchen.

And at the appointed hour, usually 8am, the buzzer is pressed to give Steve the all clear to set off and we fall into our travelling routines.

For the first couple of hours, that generally involves a lot of sleeping and a fair amount of listening to iPods (often both at once), with a bit of looking out of the window thrown in.

The first comfort stop of the morning sparks a bit more life into the group – especially if it is coupled with a shop to stock up on snacks and drinks – and we hit the road again until lunch.

That is generally taken on the side of the road, although Joe and Steve have sniffed out the odd beach and clifftop that has seen lunch include a bout of swimming and the odd kickabout or game of frisbee.

Afternoons on the truck can start a bit sluggishly, but tend to pick up as someone’s iPod is plugged into the speakers or a game of Uno breaks out, complete with a fair amount of shrieking and arguing over the seemingly endless list of amendments to the rules. Whichever ones we use, Karla usually wins.

Of course, there is always the option of looking out of the truck while we eat up the miles and there has been some sensational scenery and sights roll by the windows, which have spent most of the time rolled up to grant better views.

Over the past few days, those views have involved a lot of sand, much of which has blown in on top of us, meaning the headscarves we were convinced to buy in the medinas have come into their own.

Mind you, fitting a pair of headphones over a headscarf is not the easiest job in the world.

And, at some point, we pull in to our stop for the night and the whole process starts again – tents up (once everyone has worked out where the snorers are stationed for the night), kitchen out, fire on. If there happens to be wi-fi and showers, the race is on to get both of them at their best.

The race was of an entirely different type when we pulled into a spectacular bush camp in the shadow of a sand dune, plenty of the group lining up to race up to the top.

We’ve had another night among the dunes and several in the enclosed compounds of campsites and hostels, while the truck day pattern was broken up by our first major border crossing of the journey.

It was all going so smoothly as we crossed out of Morocco, across no man’s land and into Mauritania with the smiles and jokes of the passport officials sending us on our way. Until one customs official dragged his heels with the final piece of paperwork for Nala and we were reduced to a prolonged bout of Uno to pass the time.

In the end, six hours after reaching the Moroccan border, we rolled into Mauritania.

It was enough to drive a man to drink…