“You mean you forgot cranberry too?”

AND, with the words of The Waitresses’ Christmas Wrapping, the A-Z iPod blog returns from its Christmas break.

Yes, it is only October, but with alphabetical needs overtaking the constrains of the Gregorian calendar on this journey, Christmas popped up heading down some country lanes through Somerset on a glorious early autumn day.

It wasn’t quite Christmas In July (Sufjan Stevens’ offering to the festive selection box) and a lot of it was not even that festive – especially Christmas In Nevada from Willard Grant Conspiracy, which popped up twice and is welcome any time of the year – before The Waitresses wrapped it up with the first real jingle of bells.

That musical detour was excusable. After all, it is just following the rules laid down for the journey.

Far less excusable are the Christmas decorations which have already been hanging from our office ceiling for more than a week.

The reason, so we are told, is to inspire the advertising department as they start turning their minds towards sales for the festive period (even though most of them spend very little time in our office any more), but generally only serves to confirm the reputation of editorial as rather less full of Christmas cheer – at least until the seasonal drinks are broken open a lot nearer the actual date.

The decorations’ arrival prompted two responses from our section of the office – either tweeting pictures with exclamations of horror at the early onset of tinsel or digging around desk drawers for the lights and tinsel which were tucked away on Twelfth Night, if only to wrap around the screens of less enamoured colleagues the moment they stepped away.

It also prompted a revival of a long-standing argument with a colleague over the merits of The Waitresses’ festive evergreen – he hates it, while its mix of a good tune, Christmas cheer and healthy dose of cynicism puts it high on my (admittedly short) list of Yuletide favourites (alongside, rather obviously, Fairytale of New York, the more wilfully obscure I Want An Alien For Christmas by Fountains of Wayne and the more recent double entry from Smith And Burrows, When The Thames Froze and, particularly, This Ain’t New Jersey).

In years gone by, such an early onset of decorations, the seasonal aisles which have started to pop up in supermarkets, the first hints of Christmas adverts in the paper and, particularly heinous, the start of the X Factor, would have had me moaning as loud and long as anybody (it was more loud and brief this time round), but this year is not going to be a normal festive break.

For the first time in many years, my Christmas plans remain a mystery.

It will be somewhere in Africa. West Africa to be more precise. And the current provisional itinerary has us crossing from Sierra Leone to Cote d’Ivoire on Boxing Day, so a repeat of the last Oasis Overland Trans-Africa trip’s Christmas Day on the beach in Sierra Leone – complete with pig on a spit – is a possibility,

But anything involving that part of the world is subject to change at the moment.

Wherever we end up, it will be only my second Christmas spent away from the family – first at my parents and, for as long as memory serves now, at my sister’s with the brother-in-law on cooking duties.

The last one was, probably, 1987 when Christmas lunch was eaten in an Austrian mountain restaurant on a school ski trip.

December 25 was the only day on the entire trip when the sun came out and we could actually see where we were going – the reduced vision at one point leading to a group of us taking a wrong turn, heading off piste and facing a bit of a drop off the garage roof we were somehow standing on.

Visibility was bad, but not bad enough to mask how big a drop it was.

Skiing trips followed the Christmas breaks for many years – mainly because the first week of the new year is genuinely cheaper – which meant two festive traditions.

Firstly, Boxing Day meant a swift return to work to compile the day’s sporting news and results and free up time off over new year, while, less welcome, the big day provided a signal for my back to go into spasm.

Twice it went while sat at the table for Christmas dinner and left me barely able to get up. It was not, as my sister would probably claim, a way of avoiding the washing up. It bloody hurt and, despite being much better at handling the warning signs, still does when it goes again.

So regular was the Christmas backache and the ensuing rush to get me back on my feet for skiing, my osteopath rang in advance one year to suggest booking an appointment for the day they returned to work. It was needed.

The other annual preparation for a skiing trip was the compilation of some C90 mix tapes, which almost certainly included some of the tracks in the lengthy latest section which carried us from Phosphorescent to Gorillaz. 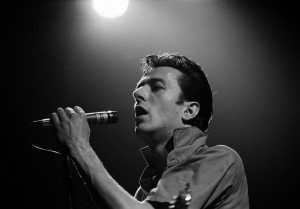 Leading the way in this latest batch of songs were The Clash, who popped up with four different tracks – Cheat, City of the Dead, Clampdown (twice) and Clash City Rockers – while Sufjan Stevens appeared again with the classic Chicago and The Hold Steady (next on the live gig list later this month) surfaced with two versions of Chips Ahoy!

There was two outings as well for Christine by House of Love, a band which never really won me over totally, despite what my companion on many of those skiing trips thought of them. The same can be said about The Smashing Pumpkins and several friends. They contributed Cherub Rock (the Smashing Pumpkins, not my friends).

And there were returns from frequent visitors The Wedding Present (Cherez Richku Cherez Hai), Billy Bragg (Cindy of a Thousand Lives, among others), Arcade Fire (City With No Children) and Echo and the Bunnymen with the epic Clay.