“GET closer,” they said. “Walk alongside him. Stroke him.”

And why not? After all, he had posed for pictures alongside his sister, walked among us and generally played around like any youngster out for a walk. And, if all else fails, there was a stick in my hand to sort out any problems.

But there was one over-riding fact which remained firmly at the front of my mind as they urged me to catch up with the trotting bundle of fluff and sharp, pointy bits.

Cute he may be, but he was still a lion.

And a stick is only going to go so far…

Considering what its main attraction is, Antelope Park is poorly named. There are antelope, but make no mistake, lions are the main course at the private reserve that was our base for three nights after leaving Bulawayo. Antelope are more of a starter.

There are elephants to get up close to – closer even than Elephant Sands – and other wildlife (some managed to get excited about dangling a rod off a bridge among everything else on offer), but the lion’s share of the attention is reserved for the big cats.

Walk with them, watch them eat, go out hunting with them and grab a string of photos with them, this is as close as we are likely to get (or want to get) to lions.

Which poses one or two questions.

Who is being exploited here? The tourists stumping up the cash or the lions (and elephants) who go through their paces for the cameras? And does that make this form of conservation with the animals kept in controlled environments (let’s be honest, enclosures), any better than other places which allow their lions to roam free, but with the risk of a hunter’s rifle cutting short their existence?

Better to live a day free than a year in captivity?

At times, particularly when the elephants were going through their routines for a handful of peanuts and the young lions were steered from one picturesque photo stop on our walk to another, there was a touch of unease.

Right up until it was my turn to hand my camera over to someone else and step in for the killer snap with the big beasts.

As well as a resort in its own right, Antelope Park is the home to the African Lion and Environmental Research Trust (ALERT), a programme designed to reverse the dwindling numbers of lions across the continent with a four-step scheme of raising fresh generations that will see less and less human interaction before finally producing their own offspring – wild lions, born of a captive heritage.*

It is a long process as the lions, born in captivity, are gradually taught the skills they would learn naturally in the wild, are selected to form prides and then sent out to live as wild in protected reserves and, hopefully, provide future generations who will be no more subjected to human interaction than any other big cats.

Alongside this, ALERT run programmes to educate us, lion’s biggest predator, on how we can co-exist – although still not entirely clear how any education is going to stop anybody reaching for his gun if a lion comes too close to his family or livestock.

Our education began with a passionate presentation of the programme from Dan, who headed from the wilds of Somerset to Zimbabwe as a volunteer and has ended up as project manager, who also ran through the activities we could do with the animals over the next couple of days.

With our individual timetables drawn up, we settled into life at Antelope Park with a few beers and steeled ourselves for a night huddled up for warmth as the southern hemisphere’s slide from autumn towards winter is really beginning to take hold as soon as the sun disappears.

Before getting up close to the lions, first up on my schedule was a trip to interact with elephants.

Early unease and a certain amount of cynicism at them going through their range of tricks with their handlers at “Elephant Stadium” was soon washed away as we were beckoned forward in twos or threes to our designated elephant and handed a fistful of food pellets to keep their attention.

Drawing the line at going up on the back of our elephant (no animal should have to endure that), it remained a great thrill to be sat on the knee of one of these wonderful, dignified creatures – even if a quick flick of her trunk at one point made sure it was all on her terms.

We had an unexpected second encounter with the four elephants as they were walked along (and in) the river which formed one side of our campsite, before a group of us were whisked off for our next activity, a tour of the lion enclosures.

This is where the lions live 24 hours a day as they are assessed to see which would make the ideal pride or are studied by the programme staff and volunteers, particularly the lions who are suffering from feline HIV.

If that was our first encounter with the lions, the next day was dedicated to them, starting at the crack of dawn with an hour and a half strolling through the bush in the company of 10-month-old siblings Africa and Aleka.

Playful, full of life and, to use Ale’s oft-used phrase, “so adorable” they thoroughly enchanted all of us for the duration of the walk.

Yes, there were the staged moments as we stopped for them to be pictured on a branch, on top of a mound of earth or, one by one, with us crouching behind and stroking them or walking alongside them, but it was impossible not to fall a little bit in love with them.

Even when the impossibly handsome Africa was getting a little bit bored with it all and really did not want to walk alongside me for my turn in front of the lens. He was far more interested in what his sister was doing.

We were reunited with the pair, as well as another two youngsters, at feeding time, even getting inside their pens as they chewed away at great lumps of meat. 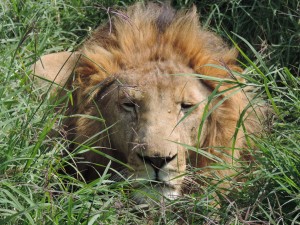 There was certainly no getting in the pen, however, when the adults got fed.

Instead, we were crouched up against the fence, inches away from a rather revolting pile of cow offal which saw the male lions chase down the hill to fight for the best bits.

Yes it is totally choreographed and makes for the perfect video camera moment – the guttural noise is heart-stopping, as is the ferocity with which they contest the lion’s share, although no camera can capture the smell, especially when the contents of the offal sprays through the fence – but it is a moment to savour and, to be honest, there are times when things being that controlled are a bit of a relief.

There was nothing too controlled about our final lion activity – three hours sat in the cold on the back of a jeep after dark as three adolescent lionesses (retired from the cub walk) were taken out to hunt whatever we came across.

We spotted a fair few things in the gloom, mainly impala and wildebeest, but the lions (sisters known as the 3Ks, which was rather ironic to be out on a hunt with after dark) were more content to be out and about rather than worrying about their evening meal.

They finally came to life in pursuit of a mongoose, a thrilling, all too brief chase through the scrub and trees which ended with the lions seemingly getting bored and letting their quarry go, just as it seemed they had it pinned down.

So not the result most of us wanted to see, but perhaps a welcome reminder these are wild animals at heart and cannot be compelled to conform to any tourist’s must-see list.

But over the course of three days, we had ticked off enough moments high up any list to keep even the most cynical of us grinning for days (or at least until the cold hit as we climbed into bed).

Questions certainly remain as to whether this is the right way forward and is ethically any more about conservation than tourism, but two key facts sway my mind in its favour.

Firstly, try looking into the eyes of a lion (or an elephant for that matter) and there is so much going on behind them. It is clear they will not do anything they really don’t want to.

And, probably most importantly, better they are subjected to shots from endless cameras than one shot from a gun for the entertainment of anyone with enough money to pay for the dubious honour.

* It’s a complicated process – let them tell you more about it at www.lionalert.org