ONE thing about elephants that’s hard to forget. They are pretty big.

That, hopefully, will come in handy when trying to frame them in focus somewhere in the middle of a photo at some point in the next nine months, but when they are lingering in the corner of the room, it makes them pretty difficult to ignore (which also holds true about the pile of kit which has been growing in the corner of my flat).

As mentioned in a previous post, the elephant in the room for our Trans Africa overland adventure over the past few months has been Ebola.

And no longer can it – or the fairly constant questions about it – be ignored.

In the end, it was not any threat of the disease which forced a bit of a diversion around the affected countries in West Africa, but practicalities stemming from steps being taken to contain it.

Oasis Overland have been tracking the elephant over the last few months and after consulting, among others, the World Health Organisation, African Travel and Tourism Association and the Foreign and Commonwealth Office, they have taken the decision to turn east from Senegal rather than continuing south around the coast.

Instead of heading straight through Liberia, Guinea and Sierra Leone – the worst affected countries – the new route takes us through southern Mali (and possibly a bit of Burkina Faso) before heading back towards the coast and the original route in Cote d’Ivoire.

Overland trips have to adapt and it is all part of the adventure, but it is nothing new for Oasis. They can explain.

“Ebola is bringing many challenges, and as a group we need to be prepared that elements of the trip may need to change or be amended,” read our e-mail from Natalie at Oasis HQ, who has been keeping us informed, steering us in the right direction and answering any number of questions over the past few months. “It is still two months until we get close to the areas that have been affected and we will continue to monitor the situation.

“Mali is a country we know well from past trips, your drivers have been to before and visas are easy to obtain on route.  I should stress that the decision to travel via Mali is based primarily on us needing to avoid border closures rather than the chance of contracting Ebola. 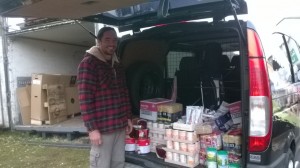 “It is a hard disease to catch. However, we will be putting extra steps in place to ensure good hygiene standards on board the truck.

“The route through Mali is not a new one for us.  We travelled this way for many years up until two years ago and in the past our groups have really enjoyed Mali.  As with our past expeditions, this is all part of the nature of a Trans Africa trip.”

The debate about how to deal with Ebola has not been the only thing keeping Oasis busy over the past few weeks.

On my visit to their base to drop off bulkier bits of kit a few weeks ago, our truck Nala – evidently the name of the animated love interest in The Lion King, but also the name of one of my sister’s Labrador’s mates – was undergoing a touch of paint and bit of TLC.

It has been stocked up, our tents tended and checked and our tour leader Joe has been wading through a pile of paperwork and the plans for the next nine months, taking a quick break to write about his preparations, before Nala and crew headed off to Gibraltar tonight. We fly out to meet it on the rock next Tuesday.

Preparations here have stepped up a few gears since the countdown to leaving work reached zero and there was finally time to crack on with the jobs which had been multiplying for months.

And, with one or two minor exceptions, the to-do lists for the trip itself are pretty much done – dutifully maintained, drawn up and written up each night, only to be immediately altered early the next day to accommodate my failure to get up as early as planned.

Visas are sorted (Ghana in the passport with pre-approval registration for Senegal), all jabs complete, malaria tablets collected, rucksack repaired, farewells said (and toasted) and piles of kit and clothes bought (some of it planned), dug out from storage and currently filling up the sofa and its surrounds in the front room of my flat.

The one major job for the trip left – before packing up my flat, bidding farewell to my car after 12 years and finding time to say a few more goodbyes, write a few more posts and learn how some of the new bits of tech work together – is to pack and one glance at those piles suggests my reputation for over packing is well deserved.

There’s decisions to be made – old shorts, new shorts or both?; an old fleece which can be discarded after some cold early nights or the one which zips inside my waterproof and is more convenient, but not as warm?; iPad as well as MacBook Air? Whatever the answers (and the iPad decision is becoming easier due to the negative impact the latest update has had on it), it’s going to be a complicated process.

Suggest getting up on time to allow all of the morning allowed for packing on the to-do list.