A year ago today, caught my last sight of a big, yellow overland truck as we boarded the replacement ferry over the river from Suriname to Guyana it had narrowly failed to fit on.

A reunion was delayed by red tape, missing paperwork and, eventually, by our forced retreat from Colombia as borders shut and the world shrank with the spread of coronavirus.

But for the last 12 months, there has always been the belief the big yellow truck was out there waiting to open up new horizons when we eventually emerge blinking into the light when travel is not a dirty word.

And then came this week’s news that Oasis Overland, the small company which operates the yellow trucks, had ceased trading.

All of a sudden, that exciting world waiting out there for us when we are able to get out in it again got a whole lot smaller.

The news of Oasis’ demise was met with dismay and no end of shared memories from former passengers and staff on social media – it may not be the best known company in the world, but those in the know will really miss it.

To understand why is to  understand the aspects of these trips which are hard to explain when people ask about what makes an overland adventure on a big yellow truck.

Overlanding: The Things They Don’t Tell You

Have tried to do that elsewhere on this blog – and there is plenty more on the list of pieces to write – but here goes.

My two Oasis trips total more than a year when the answer in the address box on a visa form could easily have been “a big yellow truck” – 10 months on Nala around Africa from north to south and back again, followed by six months on Spongebob in a (sadly uncompleted) circle of South America. 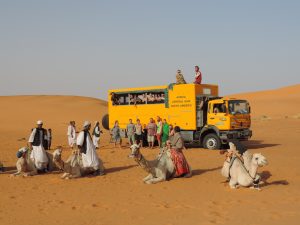 Along the way, both trips took in extraordinary sights and experiences which feature highly on any travel bucket list – trekking to see gorillas, the Inca Trail to Machu Picchu, the Serengeti, New Year’s Eve on Copacabana Beach, journeying up the Nile, the Uyuni Salt Flats, some of the world’s great cities and so much more.

You will find plenty about those in travel guides. They are on the highlights list for the trip that persuade people to sign up in the first place.

And they are all great – an hour spent with gorillas is one of the greatest experiences of my life, likewise rather longer trekking to Machu Picchu.

Even if we could not see much of it through the mist and rain when we got there.

But suspect the reason people feel so strongly about their Oasis experience runs rather deeper than that – it is not the big-ticket items, it is the imponderables, those moments you share with your truck family which elevate the whole experience.

They might be small moments, the stories behind the pictures, but they add up to something special that makes me – and many others – itching to get back for more.

While trying to forget the itching from insect bites.

Travel is not so much about the destination but the getting there. Nowhere is that truer than life on a big yellow truck (and it is always a truck, never a bus – unless putting that on a form makes life easier).

There is some truth in that joke about putting the truck as your address. These trips, certainly the longer adventures, are not holidays. They do become your life, your home.

Even provided an emergency bed when we found ourselves locked out of the hostel at the end of the world.

And the people you share those days, weeks, months, miles, campsites, bush camps, cook groups, nights out, border crossings and back of the truck with become as important as those travel highlights. Even digging the truck out of whatever it is stuck in.

A Day In The Life On A Big Yellow Truck

One of the high points of South America was a reunion in Buenos Aires with a friend who shared those 10 months in Africa for the first time in five years. It was an instant reconnection.

At rough count, have travelled with about 40-plus people on those trips and would happily meet up and share a few beers, rum and cokes or caipirinhas with pretty much all of them.

Couple of honourable exceptions, but even one of them might be fun to see how much effort they put in to avoiding talking, or even making eye contact, with me.

Mind you, at the moment would be delighted to have a drink with pretty much anybody.

While such a drink or travel is off the agenda, spend much of each day surrounded by the same four brick walls.

Given the huge distances covered, overland travel can mean equally long hours surrounded by the four sides of the truck. Often while hot, sweaty, dusty and sharing the space with a number of other people with equally limited access to a shower.

But rather than being restrictive (or even that smelly – you are, after all, in the same boat), those days on the truck always offered a window and access to a wider world full of anticipation about what view is round the next corner or what lies in wait at the next destination.

Be that a Patagonian wilderness, west African dirt road, Brazilian beach, Sudanese desert – all of which provided scenery, destination and camp for the night – or a small village or settlement keen to welcome us with open arms. Or the odd rock.

News of Oasis closure has obscured that view, blocked those horizons. 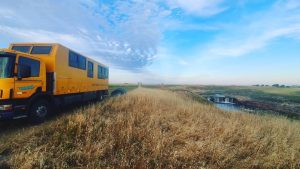 Thoughts are with the staff and crew – several of whom have become good friends – and the countless guides, local operators and fixers along the way who all help to make the adventure and depend on travellers to make a living.

One day, when this pandemic is over and the world is open again, we may see the yellow trucks or something similar back on the road.

Into The Wild Camping

Until then, we can dream about more amazing overland adventures – and those remaining five weeks we were forced to miss in Colombia and Ecuador, plus a Trans Africa return and the Silk Road adventure were very high on the list – and reflect on the memories of those life-changing journeys.

And life changing is not pushing it too far – even without the yellow trucks, my horizons are far broader than they were before first stepping on Nala six-and-a-bit years ago. Even in lockdown.

Have made friends for life, seen places and experienced things which seemed to be out of reach, have countless tales to tell, learned a lot about myself (despite being well past 40 before starting this obsession), challenged my physical capabilities and my own conceptions of them.

And fell in love.

So for all that and so much more, thank you Oasis.

If this is the end of the road, it has been an amazing journey – there is just an awful lot more miles left to go. 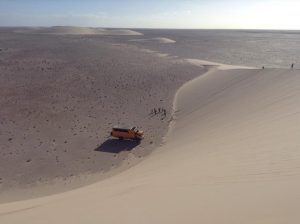